Today, Ewing’s population is 387 and is linked to the outside by Highway 275. The people of Ewing take pride in being part of a caring community, rich with history.

This part of Nebraska went unnoticed for many years. Not until May 1870 did a covered wagon turn off the trail and stop just below the north and south forks of the Elkhorn River. James Ewing and his family decided this was a good place to settle, so started carving out a home, found a good water supply, and planted a garden and “sod corn.”

In 1911, the seven Savidge brothers of Ewing constructed and flew one of the first heavier-than-air machines made in Nebraska. In partnership as inventors, mechanics and pilots, their aircraft was an exposed cockpit biplane model. The brothers perfected their airplane until they were sure it was safe and then started on barnstorming trips in the Midwest states. During this time Matt, the most daring of the boys, learned to loop the plane as well as other stunts. He was the first pilot in the world to introduce skywriting.

Number of motels and hotels in city: 1
Total number of rooms available: 8

Number of banks in city: 1

Chamber of Commerce: No

The Junior/Senior High School is together in one building. This creates an easier transition from Jr. High to Sr. High School and allows the teachers to build a better relationship over a 6 year period. Ewing Public School was founded in 1891 and covers 197.2 square miles. The school is a class 2 system that covers grades K-12 and is accredited by the State of Nebraska Department of Education.

Avera St. Anthony’s Hospital, a 25-bed unit, is located in O’Neill, 21 miles away. They provide the community with 19 out-patient clinics and up-to-date services. There are two medical clinics in O’Neill with five medical doctors. A doctor visits the clinic in Ewing once a week. The GoldenLiving Center, an 88-bed nursing home, The Evergreen, a 33-unit assisted living, and Valley Hope, a 75-bed rehabilitation and treatment center, are also located in O’Neill. There are five dentists also located in O’Neill.

Standard building codes are enforced in the village of Ewing. Fire protection is provided to the village of Ewing and the rural areas by a 20-member volunteer fire department; 11 members are EMT certified. The department also provides protection to areas outside the community and responds to mutual aid calls with area communities and the Rural Fire District. There are 35 fire hydrants in Ewing. A new fire hall was built in the fall of 2008 and additional interior work will be completed as time and funding are available. The Fire Department has up-to-date fire equipment including 2 ambulances. The Ewing Township Library contains 4,000 volumes with an average annual circulation of 1,500. The library has books and movies for check out. Story hour is held four times each summer. Other library resources include a computer with Internet access, book clubs, and a library commission.

More than 13,500 licensed motor carriers with worldwide connections are based in Nebraska and serve businesses throughout North America. 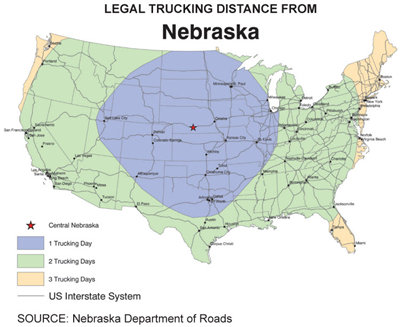 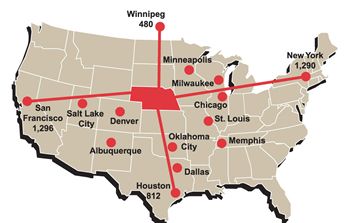 The Village of Ewing is served electric power by Elkhorn Rural Public Power District (ERPPD), a wholesale power customer of NPPD. Service is supplied by a 34.5 kV substation with one incoming feed at 34.5 kV and three outgoing feeds at a voltage of 2.4 kV. The community is supplied with three 500 kW transformers.

The municipal water system in Ewing is supplied by 3 wells, which have an average depth of 183 feet. The system has a pumping capacity of 850 gallons per minute and serves 99.5 percent of the village population. The overhead storage capacity is 50,000 gallons. The average daily demand is 21,000 gallons, and the historic peak daily demand is 400,000 gallons. The system has a maximum capacity 1,274,000 gallons per day. The static pressure is 41 pounds per square inch and the residual pressure is 40 pounds per square inch. A 280 foot well produces 480 gallons of water per minute. The color of the water is clear. Capital improvements to be completed by 2013 include the painting of the water tower at a cost of $27,000. This project will be financed by revenue funds.

The community also has a storm sewer system serving a small part of the town. The lagoon treatment plant, built in 1972, has a daily capacity of 334,000 gallons, an average daily flow of 110,000 gallons, and a historic peak daily discharge of 300,000 gallons.

Great Plains Communication, Inc. has a digital central office in Ewing. Telstrat with ESA off Copercom switch is available in Wausa. Extended area service from Ewing is available to Orchard and Page.